A tiny little cameraman sailed into our bay today. 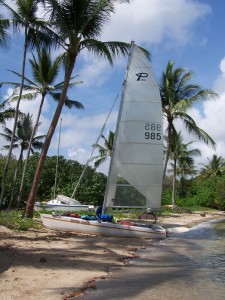 The Muckle Dayley at Portland Roads

Our bay is approx 220 kms south-east of Bamaga at the tip of Cape York, and about 800 kms (by road) North of Cairns.

I was surprised – I assumed that it had been launched from the point just up the road about 250 metres, and I hadn’t seen a car and trailer drive past.
So I wandered down to talk to him.

I should say here that his boat is tiny – it is an eighteen foot (yes that is about 5.5 metres) catamaran called “Muckle Dayley” after his second daughter.

It is basically 2 canoes bolted together with bit of mesh between them and a mast.

He hadn’t actually come from around the point, but from Port bloody Morseby!

And that IS Port Morseby in New Guinea.

Prindles are generally very well regarded in the sailing world as rugged and durable cats.

Zoe and I stood with him next to the “Muckle Dayley”. You can see just how small his boat is. 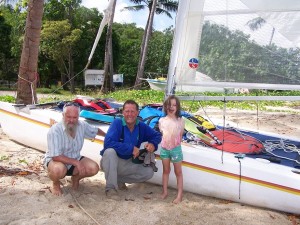 Greg Seamus and Zoe beside the Muckle Dayley

That being said I wouldn’t do what Greg is doing. He told us about having crocodiles nudge him in the night when he was sleeping on the thin nylon mesh that is his deck.

This is 30 cm from the sea! My sphincter puckered as he told me.

He had many adventures along the way – met lovely, hospitable people living on tiny little islands just off New Guinea. On one of these a man swam out to pull the “Muckle Dayley” in to shore, then put him up for the night, fed him royally from their meagre food stores and sent him on his way again. 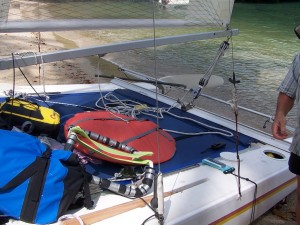 He encountered the hugely strong tidal currants of the Fly River, met a lovely couple, Shelley and Justin, and their two boys on Thursday Island (coincidentally we also had met them a year or so ago).

His living quarters on his cat were tiny – I was gob-smacked at just how small a space he had on the boat. It really was tiny; he also had to tether everything or store it in the 2 waterproof bags he had. Water was stored in the hulls in 1.5 litre bottles.

He had a small dome tent, and a little folding chair. 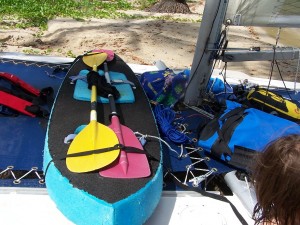 He did have a lifeboat, again just looking at that scared me.

He left on a quite windy day and last we heard was on Lizard Island and was about to sail to Cairns where he planned to end his voyage. 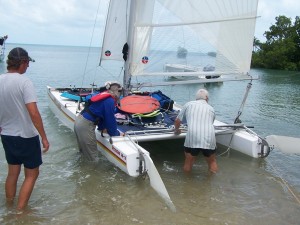 I was very impressed with what Greg had done – it was a pleasure to meet him. 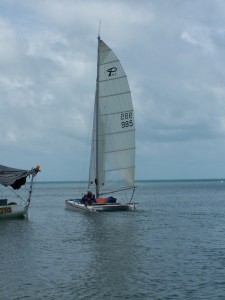