Boomer was barking ferociously at something behind the kitchen wall. I thought it must have been a snake, so very gingerly peered around the corner. 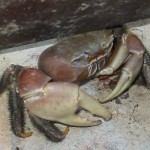 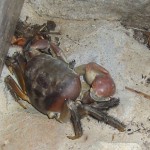 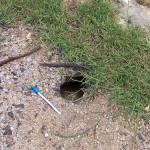 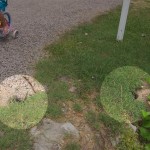 Either it or it’s sibling lives in a tunnel under the main (only) Portland Roads road. This crab has at least one tunnel that crosses under the road. Earlier in the year a roadworks crew re-bitumen-ised the road and covered one of it’s entrances. Not discouraged in the least it just re-dug it’s way through about 40mm of compressed gravel and bitumen. Bloody impressive and you can bet I kept my fingers well away from it’s claws.