The tow major rivers on the road in are the Pascoe and the Wenlock. These are impassable for much of the wet. The Pascoe is longer and often deeper than the Wenlock. 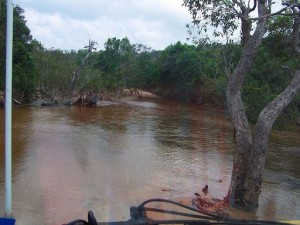 We visited Lockhart on the way in. I couldn’t work the diesel bowsers, so had to ask some aboriginal kids. The local store wasn’t too bad and did have quite reasonably fresh vegies. Cate talked to the manager, who knew Alan quite well.

We then thought we might try the local doctor/medical centre. We parked on the road outside and were immediately accosted by a woman who basically told us to fuck off – until we said we were about to start care-taking Alan’s place for a year. Then everything was OK.

We were told later by Alan that she was a very nice person who was the head nurse (and I think administrator) but that she was very protective of her medical centre – it has been set up for the local aboriginal community and apparently tourists do often become a nuisance there.