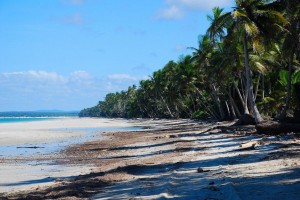 NOTE: We’ve closed the petition as we had to have all communication to DERM by 5pm Jan 5th.

Thank you to the people who signed and I’m sure emails direct to the member (Lorinda.Morrissey@derm.qld.gov.au) after the close date can’t hurt.

Have your say by 5pm Jan 5 on the proposal for Queensland Parks and Wildlife Service (QPWS) to close the ‘Esplanade as Road’ for Kutini-Payamu (Iron Range) National Park CYPAL which includes Chili Beach. (Chilli Beach)

The QPWS will be able to remove the iconic Coconut Trees that line the beach. The trees are part of the history of the area and are part of the beauty and special character of Chili Beach. Nearby islands have had esplanades closed despite objections from Cook Shire and their Coconut trees have been removed. This is also of concern as coconuts can be a lifeline to stranded seafarers.

QPWS will also be able to restrict vehicle access to the area in front of the Chili Beach Camping Area and restrict marine vessel access to the National Park shoreline.

Residents of the area – Portland Roads, Weymouth Bay and Lockhart River are concerned and have only been given until Jan 5 to respond. Portland Roads and Weymouth Bay have a very low population with some 20-30 residents, they have created a petition but would like to include the many travellers who visit in the dry season.

Community Objection to Application for Permanent Closure of Road

This objection is submitted on behalf of landowners, residents and interested parties of the Portland Roads, Packers Bay, Pascoe River, Restoration Island, Chili Beach and adjoining areas whose details are listed as Attachment A. This objection letter is available for access under the RTI act without consultation.

This objection is part of the wider concern that if the road is closed, it will be the first step to include said ‘esplanade as road’ areas into the adjoining state land (NP) whose policies and practices differ markedly  to that which is current; a public right to use the esplanade.

Following the due process of “public notices and appropriate enquiries about closure”, it is also of concern when, DERM, the applicant for the road closure, also provides the assessments and advices on the decision to the minister (DERM). There is no decisional transparency for our community when DERM is advocate, judge, and jury on the road closure.

An area of land, whether surveyed or not, dedicated, notified or declared to be a road for public use, the term “road” includes esplanades, reserves for esplanades, pathways, thoroughfare or track. A “road” does not need to be constructed as a pre-requisite to dedication to public use.

The road is an integral part of our community.

Our community objects to the road closure:

The need for ongoing, full and unrestricted, access for gazetted public use needs to be protected not only for current uses but for potential uses.

These include but are not limited to:

Ownership of the land is already vested with the state

In conclusion, our community objects to the road closure and requests the tenure of DP241419 and DP241421 remain as Esplanade as Road. Further, our community requires an itemised response to all points raised as part of the minister’s decision on this matter.