I was woken at 4am by the noise of hundreds of Dainty Green Tree Frogs (Litoria gracilenta). The noise was enough to wake and the bedroom was over 100 metres from where the frogs were. They are beautiful little frogs (also known as Graceful Tree Frog) only about 40mm – 45mm long. I could only see a couple while I was taking the video.

We’ve had them in the shack  before but only one at a time. 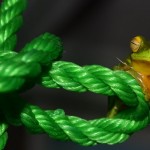 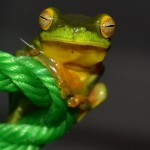 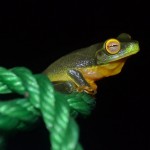 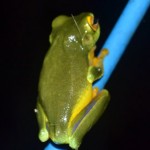 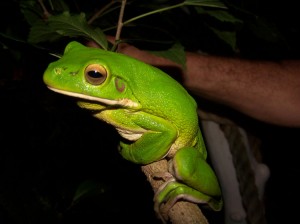 We spotted this huge green treefrog yesterday, here at the Portland Roads Beach Shack. He was perched in a tree just near the path to our house. He sat perfectly still while we photographed him. Notice that he has ear patches rather than holes. That is Seamus’ arm behind him holding down the tree branch so that we could get a better angle. It gives you an idea of how big the frog is.

According to wettropics.gov.au
The White Lipped Tree Frog is the worlds largest tree frog growing in length to 14cm. With a green body with white stripe on lower jaw, and a long flattened body and it has PROTECTED status.

Much of the wildlife of the Cape is not found anywhere else in Australia but is found in New Guinea. 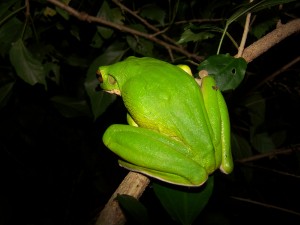