We were, as usual, running late – it was after 6pm when we finally drove out of Kuranda. Cate was driving the Suzi, Zoe and I in the OKA. Boomer still had to be picked up from the refuge at Mareeba, and Cate had to drop off library books at Kuranda.

At about 9.30 pm we really, really annoyed the dog refuge woman as it was well past her bedtime. She angrily thrust a confused Boomer into Cate’s arms and stomped off. 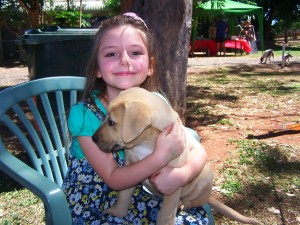 Boomer whined continuously on the floor of the back of the OKA, until he had climbed up into Zoe’s lap where he fell asleep.

We ended up camping on the side of the road (I think where Col and Rees had camped) just the other side of Mt Molloy. Put the Suzi on the a-frame before heading into Mt Molloy for breakfast  – then off to Cooktown. I had expected it to be a bigger town; I was knackered and we needed groceries so we stayed overnight in the local caravan park and stocked up on food on Sunday morning.

Then headed off to Musgrave Roadhouse via Lakefield National Park. Stopped at Isabella Falls for a paddle – beautiful spot. Kept driving up through the national park until Kalpower where we stopped for dinner and a shower. It was very hot and very muggy – too hot for comfortable sleeping so we decided to keep on driving. The corrugations after Kalpower were the worst I’ve ever experienced. The second spare was on the tyre carrier on the back of the OKA – we just lost that in the bush somewhere.

Ended up camping on the side of the road on the other side of  Musgrave Roadhouse.

Had a great breakfast at Musgrave, then headed off to Portland Roads. The road into the Iron Range National Park was corrugated with a few tricky dips to negotiate. 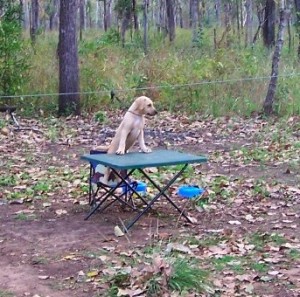 – beautiful spot although some-one had pinched the best spot before we got there. After dinner we headed off to the river crossing intending to have a swim, but saw a vehicle parked in the middle of the river with 2 people in the vehicle swinging spotlight torches vertically from the river surface to the sky and back again. We watched for 15 minutes but could not work out what they were doing. It looked a little as though they were fly-fishing with torches attached to their rods.