Watching a sunbird frolicking in the rain.  Although I try to avoid anthropomorphism, it was hard to not feel that this little bird was having a great deal of fun.

Our baby sunbirds left the nest today. I’m assuming both of them left as I only actually saw one go. Both parents were hovering close by the nest, twittering away. The baby cautiously crawled out of the nest, holding on with it’s claws until it’s beak was pointing vertically towards the floor. Then with much twittering from parents, he let go, almost tumbled but then started flying. Incredible to watch. I didn’t have time to video it and only got two photos. I watched him outside for a little while – both parent birds keeping an eye on him. Couldn’t see the other baby, so I suppose it was flying around somewhere. 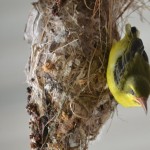 baby sunbird almost falling out of the nest – closer view 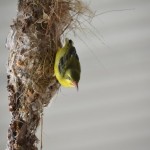 baby sunbird almost falling out of the nest 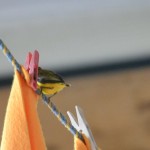 We’ve had a couple of sunbirds nesting in our verandah at Portland Roads Beach Shack. They build a nest hanging off a piece of string in about 2 weeks, then have the babies.

We have been watching them and noticed that they seem to take the babies shit (neatly wrapped in a little white bundle) out of the nest, fly away with it drop it off somewhere. 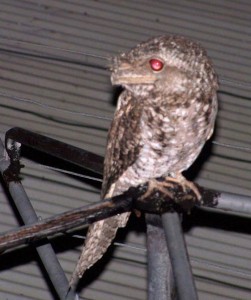 We were just talking about how much wildlife we have – we see  some amazing creature most days.

It was dark, Boomer started barking and wagging his tail wildly. I was about to tell him off; he usually barks at squeaky branches other weird noises. Then we spotted this guy in the dark, sitting on our clothesline.

He is a [wiki]Papuan Frogmout[/wiki] (click to read more in a popup from wikipedia) He is huge, he just sat there watching us curiously while we took heaps of photos, posing this way and that .

He does indeed have red eyes; they glowed red with the flash.

I just wish we could have taken a better photo though, we were trying to use our new Nikon but it just would not focus as he was in the dark, we tried shining a torch on him but then he had an orange glow, we haven’t had the camera for long so have heaps to learn. This was taken with my old Kodak which did better. Later I realised we should have put it on manual. Hopefully he will visit us again. He has flown by quickly so hopefully he will visit us again.

We had 2 guests stay for a week in December this year – a birdwatcher and a guide (Jun Matsui) from Sicklebill Safaris. They had flown in to Lockhart, hired a 4wd and stayed with us.

Jun (the guide) found a cuscus in one of our mango trees just up the road; came running back to tell us – of course we were all terribly excited and very thankful that he’d made the effort to let us know.

We watched it eat a couple of mangos for about 30 minutes. Thanks Jun!

He also sent us the following photos. 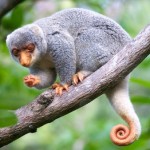 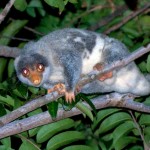 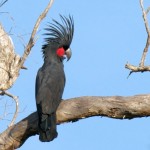 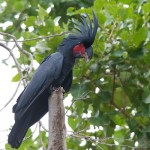 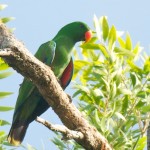 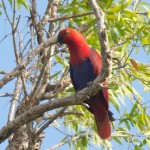 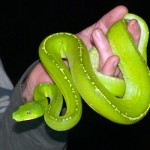 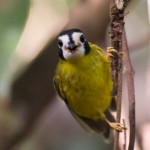 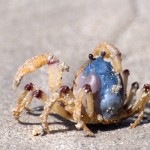 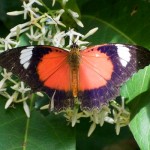 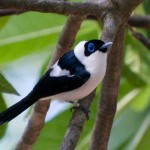 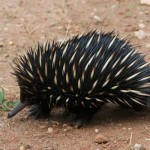 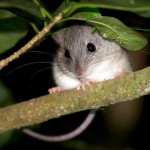 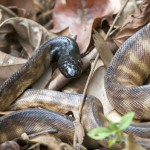 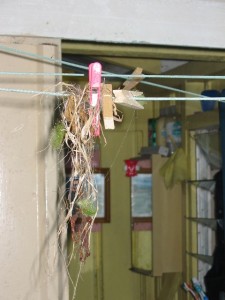 Plus below that the original nest.

They often build their nests under verandahs – it’s thought that they consider humans less dangerous than other animals, so do build under eaves and verandahs.

And often build a new nest next to the old one, then use some of the old nest in the new.
Click any image to see larger version. 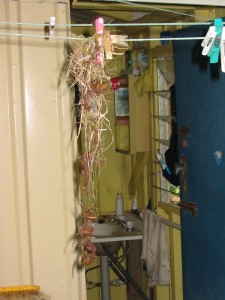 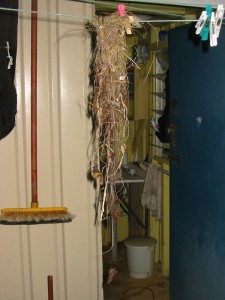 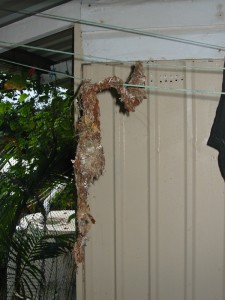 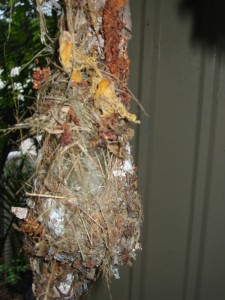 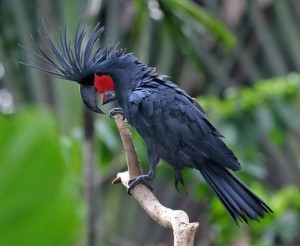 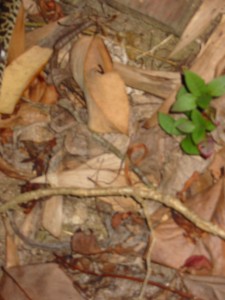