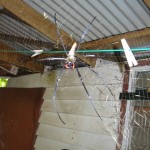 Golden Orb Spider in the Shed at Portland Roads -pic 3 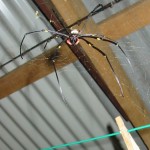 Golden Orb Spider in the Shed at Portland Roads -pic 4, it is coming to get me! 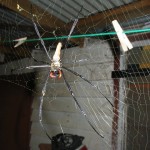 Golden Orb Spider in the Shed at Portland Roads -pic 5

Golden orb-web spiders belong to the family Tetragnathidae, subfamily Nephilinae. There are two genera: Nephila (Golden orb-web spiders) and the monophyletic genus Nephilengys (hermit spiders). There are three species in the genus Nephila: Nephila pilipes fenestrata (black-legged golden orb-web spider), Nephila senegalensis annulata (banded-legged golden orb-web spider) and Nephila inaurata madagascariensis (red-legged golden orb-web spider).
The genus Nephilengys consists of a single species, Nephilengys cruentata (white orb-web spider). These large, obtrusive spiders are one of the few spiders which can be identified down to species without the aid of a microscope and a fancy key. They are strictly web bound and find walking on the ground cumbersome. Nephila construct very large orb webs, often between trees or bushes from 1.5m to 6m above the ground. Their silk is golden in colour and extremely strong. There are trip lines around the web and quite often prey remains are strung up to form a line through it’s center. Their slightly angled webs are designed to catch large flying insects and small birds are occasionally snared, but rarely eaten. The female spider hangs inverted in the center of the web, while one or more males lurk on the periphery of the web.
Males are many times smaller than the females and can be distinguished by their swollen pedipalps which are similar to boxing gloves.

Nephila pilipes fenestrata has a creamy abdomen with a blueish marbling towards the rear and has tufts of hair on the first, second and fourth legs. It is widely distributed throughout South Africa, but absent from the drier western parts. Nephila senegalensis annulata has black and yellow abdominal markings with yellow bands on its legs. It has the widest distribution throughout South Africa. Nephila inaurata madagascariensis is more or less black, silver and reddish-brown with red legs, and may be found in northern KwaZulu/ Natal. Nephilengys
cruentata spins a characteristic white web with a funnel-like retreat and is distributed throughout the eastern coastal regions. It is generally blacker than Nephila and has a rounder, less cylindrical, abdomen with an orange/ red breastplate.

Reproduction is similar for all Nephila. As in the case of Nephila senegalensis annulata, the male spins a small sperm web onto which he deposits a drop of sperm which he sucks up into his pedipalps. He will usually only approach the female when she is otherwise occupied i.e. feeding. He descends towards her and inserts his pedipalps, one by one, into her genital opening which is situated underneath her abdomen. Copulation may take as long as 15 hours and afterwards the now exhausted male retreats to a safe place away from the female. When ready to lay her eggs, she selects a suitable site and constructs an egg sac using special loopy white silk. After a fortnight or so, the young spiders hatch inside the eggsac. At this time they are still embryonic living off the yolk. Their mouthparts, venom glands, digestive tracts and spinning organs are underdeveloped, and only after the yolk has been absorbed and their body parts are properly developed do the spiderlings cannibalise each other and must disperse.

Their life history follows a yearly cycle with the females living slightly longer than the males.

These large, shy but beautiful spiders may look formidable but are not aggressive, and even those who walk into their webs are unlikely to be bitten and although their bite is painful, it is not of great medical importance.