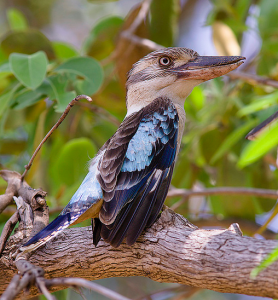 A Blue-winged Kookaburra. Photo is by Jon Clark, used with permission.

A Blue-winged Kookaburra flew past me while I was driving from Lockhart River to Portland Roads. Apparently they are common on the cape and Southern New Guinea. I had never seen a Blue kookaburra before, it was a very quick glimpse but quite striking. There seem to be lots of bright blue creatures here, birds, butterflies. Down south Kookaburras are coloured to blend in to their environment. Just another amazing site on our regular trip to Lockhart River to pick up mail and groceries.